A week of highs and lows

Happy birthday wishes this week for DH (ssshhh! he won't want you to know how hold!) and also my eldest child, DS Josh who reached 16! He didn't ask for anything or want to go anywhere. I was rather disappointed so made an extra special effort with the cake. Given the situation with FIL, I was running out of time and spent all day Friday (Josh's birthday) decorating my usual chocolate cake.

I used sugar paste for the first time in fifteen years (the last time was for his first birthday cake!). Inspired by a pic in a book, but I added lots of black glittered sugarpaste stars too, as well as spraying it over with edible gold lustre spray. The centrepiece stars should have been edible too, but there wasn't enough time for them to set hard enough, so they were cut from glittered cardstock with my Sizzix. The '16' was sparklers. 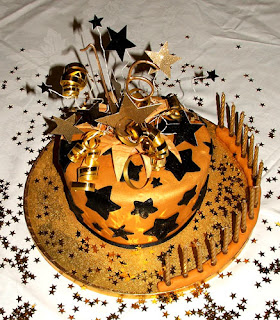 And here it is lit: 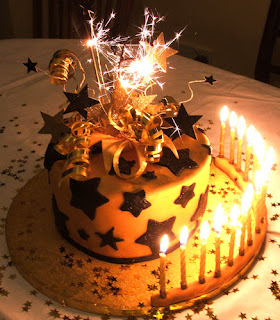 I think I rolled the sugar paste out a little too thin and it cracked a bit when put over the cake, but I managed to hide most of them with the glittered stars. I'm really proud of my efforts I have to say.

I've told the girls not to get ideas as I'm not going to this much trouble for all three every year! Too stressful (and too expensive!).

The low for the week is that my most treasured father in law has suffered a massive stroke and remains unconscious. This is devastating for our family - any prayers would be appreciated.
Posted by Suzanne on Sunday, March 13, 2011 10 comments:

Do you love to stamp? Winter is the perfect time to hunker down and get inky! Peas are gathering on the Stamping board and inviting you to participate in an event members have organized and named Winterfest! There will be challenges and chatter you won't want to miss. Two Peas in a Bucket will also be sponsoring prizes and giving you badges by participating. Interested? Just head on over to the General Stamping message board and dive right in! See the master thread for an index of challenges and details if you have questions; challenges begin March 5th. Have fun!
Now I'm not a master stamper by ANY MEANS of the imagination. In fact, the main times that I stamp are when I fancy joining in challenges like Winterfest. I love challenges, the chance to try new things and be inspired by the projects submitted by other people. I will be hosting a challenge at Winterfest myself, with a randomly drawn prize winner to get a $15 gift certificate to the Two Peas store.
The challenges take place from 5th to 13th March so there is plenty of time to join in.
Got to start clearing my desk ready to make samples for my own challenge!
Posted by Suzanne on Thursday, March 03, 2011 No comments:
Labels: Challenge, Stamping, Two Peas in a Bucket
Newer Posts Older Posts Home
Subscribe to: Posts (Atom)

Hi there - thanks for visiting me and my little space in blogland. I'm Suzanne and I'm a Scrapbooker. I've been playing with paper for eight years and still love it as much now as then. I discovered digital scrapbooking a couple of years ago and am also hooked on this format! I am proud to be on the Creative Teams for MScraps, and Two Peas in a Bucket (digital stores); and Danielle Engebretson, Flutter Expressions, Polka Dot Pixels and Wild Blueberry Ink (digital designers). I also teach scrapbooking classes and have been published in various UK craft publications.