The wonders of being watchless ... and organised!

Just a quick post. Managed to drag myself out of bed at a decent hour this morning (only used the snooze button once) and we got to school before it opened. Pretty amazing as we are usually dropping off at nine on the dot. I put it down to the fact that I took my watch off (which I only usually do for a bath or shower) and can't remember where I put it. So I was working on the premise that it was later than it actually was. Plus I was actually fairly organised and did the PE bags, checked name labels, put the school bags out and polished shoes last night.

Have had a lazy day. Well actually I was faffing around finishing off my page for the Color Combo blog this week (which I started last night). And now I have got a really messy desk I need to clear off (that really is THE worst part of scrapbooking, the tidying up after creating).

I've used some more older photos, these are from a holiday to Tenerife in 2002. Crikey I can't remember Chiara ever being so small! There was a small arcade near where we stayed and we tried the girls on this little ride. Oh sure, they were happy enough to sit on it, but once we put the money in and the thing started moving, they really weren't so keen. Needless to say we only ever put money in the machine once! 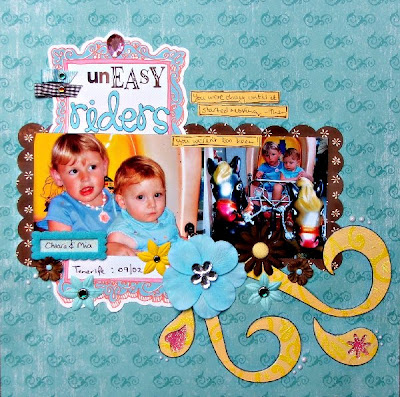 I like the look of the chipboard scrolls placed that way (I cut apart a larger piece) as it is sort of reminiscent of horse reigns and also gives the feeling of movement. I covered them with Bazzill but thought they looked a bit flat. So I used the Autumn Leaves flourish stamps with Versamark ink and then embossed them with some yellow Blonde Moments embossing powder. Just gives them a bit of interest. The two smaller pieces of chipboard (Woodware Paisley) are backed with some pink Bazzill to tie in with the pink on the Bam Pop frame and then blinged up with some Stickles. I outlined around the chipboard with my brown journaling pen just to add a little definition to the edges.

The blues are gorgeous! beautiful page Suzanne, I wish I can work the BamPop like you do!!

I've left something on my blog for you girlie!! :-)

it was hard seeing my mom go, but I'm sorry to say I have gotten accustomed to seeing family go. :(

The meds did kick in, thanks!!!

Hi there - thanks for visiting me and my little space in blogland. I'm Suzanne and I'm a Scrapbooker. I've been playing with paper for eight years and still love it as much now as then. I discovered digital scrapbooking a couple of years ago and am also hooked on this format! I am proud to be on the Creative Teams for MScraps, and Two Peas in a Bucket (digital stores); and Danielle Engebretson, Flutter Expressions, Polka Dot Pixels and Wild Blueberry Ink (digital designers). I also teach scrapbooking classes and have been published in various UK craft publications.